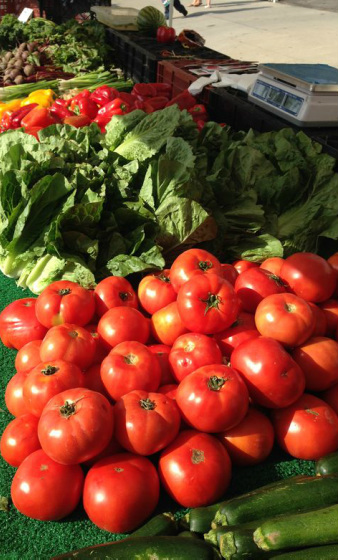 Food fads are as common as picking the slow line at the grocery store or fights for parking spaces at Whole Foods. But while fondue parties, TV dinners, and crock pot meals were never particularly healthy, today’s farm to table local food movement fad is actually good for you.

While you might get a good feeling from picking a tomato from your own garden, or purchasing a bundle of kale from your local farmers market, you are also getting the benefit of healthier food.

Since food from Farmers Markets doesn’t have to travel long distances, local food can be grown to be tasty and healthy – not just resilient to long travel. According to the Leopold Center for Sustainable Agriculture, in a study of 16 common fruits and vegetables, the average one traveled just under 1,500 miles before it was sold to a consumer. Additionally 39% of fruits and 12% of vegetables were imported from other countries.

To keep food from spoiling during these long trips, some produce is picked before it has had a chance to fully ripen – and absorb nutrients from its surroundings. This practice allows the fruits and vegetables to ripen in transit and ensures that consumers get fresh, ripe produce year round, but according to the United States Department of Agriculture, it causes the produce to lack in the nutrients that would be present if it was allowed to ripen on the vine.

In addition to being healthy for you, getting your food locally is healthy for the environment.

The average 18-wheeler gets roughly five miles to the gallon. To move produce 1,500 miles would burn around 500 gallons of diesel fuel, which is a lot of gas to burn to get a tomato that most Americans could grow in their backyards.

The Local Food Movement and the Economy

Because so much food is transported from up to 1,500 miles away, and much of it is imported from outside the country, local economies don’t always benefit from the sale of farmed food.

Concerned locavores can reverse this trend and pump their food budgets into their local – or at least national – economy by buying local meats and produce.

Restaurants and families are not the only producers and consumers getting into the farm to table movement. Farm to school movements are sprouting up across the county.

Farm to school – or farm to cafeteria – movements help both farmers and students by supporting small to medium sized local farms by providing them with consistent business and by providing school age children with healthy locally grown food. Programs also encourage experiential nutrition education activities designed to teach children to be healthy eaters for life.

Local Food Movements in Your Community

Although the local food movement has gained momentum in the last few years, farmers and organizers encourage the public to continue to demand locally grown food in restaurants and supermarkets. For farm to table food to become the norm rather than the exception, consumers have to continue to ask for local food, or the movement will end up at the back of our minds or the back of our cupboards, like so many fondue sets.